Russians were 1-2 with Kseniia Sinitsyna taking the gold with 215.58 points and Anna Frolova holding onto second at 176.21. Alessia Tornaghi of Italy surged from seventh after Friday’s short program to third at 175.93.

Ruiter, fifth and still within striking distance of the podium after the short, finished with 159.07 which was eight points better than her score in an 11th place result last month in her international debut at the Junior Grand Prix stop in Latvia.

In men’s competition, Daniel Grassl of Italy took the gold medal ahead of Peter Gumennik of Russia in second and Ivan Shmuratko of Ukraine.

On Friday, Natalie D’Alessandro and Bruce Waddell of Toronto won the silver medal in ice dancing. 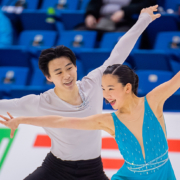