AICHI, Japan – Madeline Edwards of Port Moody, B.C., and ZhaoKai Pang of Burnaby, B.C., are once again in the medal hunt at an international figure skating competition after placing second in Saturday’s short dance at the fourth stop on the ISU Junior Grand Prix circuit.

Rachel Parsons and Michael Parson of the U.S., are in first place with 55.71 points slightly ahead of Edwards and Pang at 55.33. Alla Loboda and Pavel Drodz of Russia are third at 52.25.

Edwards and Pang were third at the world junior championships last season and opened the 2014-15 campaign with a silver at the first stop on Junior Grand Prix circuit last month in France.

Lauren Collins of Minesing, Ont., and Shane Firus of North Vancouver are sixth at 42.52 as they made their international debut as a team.

‘’I was impressed with how super professional this event was,’’ said Lin. ‘’The atmosphere was great. I was happy with how I skated but I know I can do a lot better.’’

Tamura was also delighted with her experience.

‘’I know what I need to work on for the next time,’’ she said. ‘’I wasn’t pleased with how I skated but I fought through everything. My goal for this year is to successfully land all my jumps in the program.’’

The free dance and men’s free skate are on Sunday. 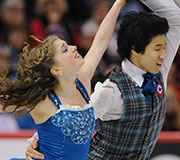 Skaters step up and show their wares at High Performance Camp